By Ayodele Johnson22nd January 2021The most populous city in Africa is also one of its most vulnerable to sea level rise and floods. To stay afloat, everything from its architecture to its transport may have to change.N

Navigating the thronging streets of Lagos, Nigeria, is a challenge at the best of times. But during the rainy seasons, the city’s streets can become almost impassable. Home to more than 24 million, Lagos is Nigeria’s economic powerhouse, making it a destination for people seeking new opportunities. But that rapid growth creates pressure on the streets, and the environment.

The streets are often flooded, in part due to the dysfunctional disposal of the 6,000-10,000 tonnes of rubbish generated daily in the city. After a downpour, rubbish piles up in open gutters and makes moving around the streets difficult. “I worry when it rains, especially when it is heavy,” says Lagos resident Stephanie Erigha. “It makes me anxious.” On one occasion when taking a taxi through a waterlogging-prone part of the city, she recalls the water gushing right into the back seat next to her.

While the overall climate in Lagos is expected to see less rainfall overall with climate change, the intensity of rain is expected to increase, bringing with it greater risk of flooding. Meanwhile, the low-lying city is also particularly vulnerable to water from another source: rising seas. If global warming exceeds 2C, the city is predicted to see 90cm of sea level rise by 2100, according to research led by marine physicist Svetlana Jevrejeva, of the UK’s National Oceanography Centre.

How, in the face of flooding, blocked streets and rising waters, is Africa’s most populous city adapting?

There is one part of Lagos that has extensive experience of dealing with high water. Much of the Makoko neighbourhood is not built on land, but rather sits on stilts above the waterline. Makoko, known as the “Venice of Africa”, is a labyrinthine slum built on stilts and navigated by canoe. The slum has little access to electricity or clean sanitation, but it has also been home to innovations like the Makoko Floating School, a structure resting on recycled empty plastic barrels for buoyancy. The school’s pyramid shape helped lower its centre of gravity and so increase its stability, while also being an ideal roof shape for shedding heavy rains. 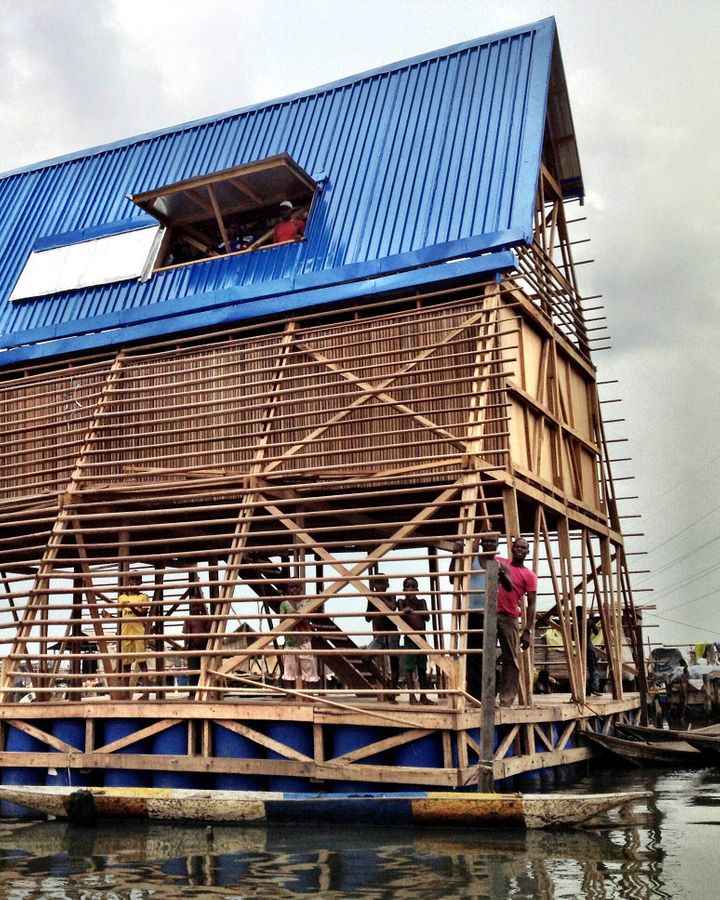 This prototype, however, was short-lived after suffering lasting damage from a storm in 2016. But it set the precedent for floating system that its architect, Kunlé Adeyemi, would put to use in other coastal cities. Iterations of the floating structure have been built in Venice and Bruges.

Most recently, a version of the design is being constructed in the city of Mindelo on the island of São Vicente, Cape Verde. “It is a floating music hub,” says Adeyemi, the founder of NLÉ, an urban design and development consultancy. “In this iteration, we are building it in a bay within the Atlantic Ocean.” The hub is made from timber and consists of three floating vessels housing a multipurpose live performance hall, a state-of-the-art recording studio and a platform for thirsty guests.

Wood, Adeyemi says, is an ideal sustainable material for building floating structures. “If you have a cost-benefit metrics of different solutions for building on water, wood will be very high in ratings,” he says. 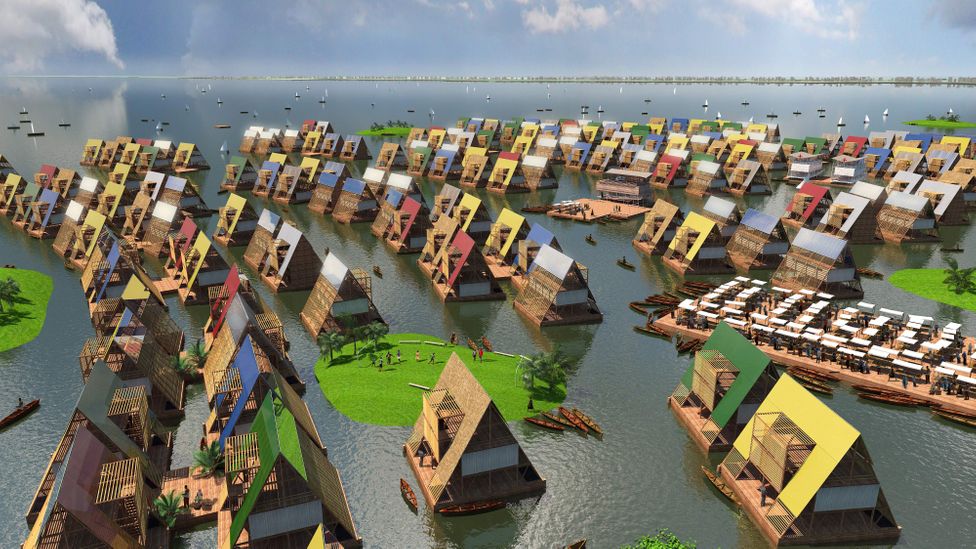 An artist’s impression of coastal communities based in floating architecture, to allow them to become more resilient to climate change (Credit: NLE)

The floating music hub is part of NLÉ’s African Water Cities project, which seeks to find new ways for waterfront communities to live with rising sea levels. Instead of fighting water, says Adeyemi, we want to learn to live with it.

It only took one ferry journey for Lagos resident Olajumoke Oyelese, to be “hooked”. The speed of travel possible on a ferry far outstripped what she was used to idling in traffic on Lagos’ roads.

Oluwadamilola Emmanuel, general manager of the Lagos State Waterways Authority, says that water transport in the city has come a long way in terms of coverage. According to Emmanuel, now there are more than 42 ferry routes on the waterways with 30 commercial jetties and terminals spanning across three districts.

Besides the city authorities, an increasing number of firms are setting up water transport businesses in the city. In 2019, Uber set sail with the pilot-run of its Uber Boat service. The goal was to ease the city’s infamous road congestion. “We are aware of the man-hours and productivity that are lost every day due to road traffic in Lagos state,” says Lorraine Onduru, a spokesperson for the company. “[We] are looking at ways to provide commuters with an easy and affordable way to get in and out of the city’s business districts.” 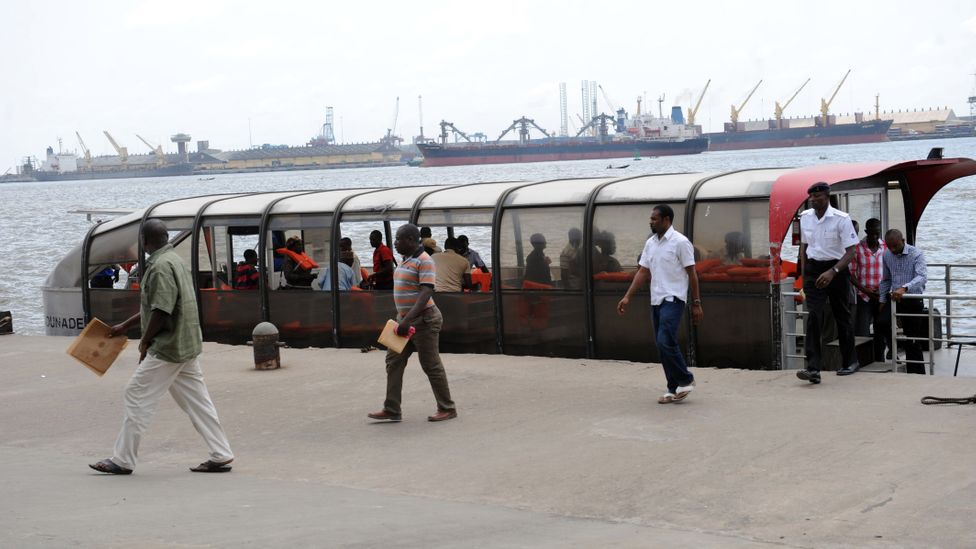 Ferry usage in Lagos is one alternative to the city’s famously congested roads, and it could be a greener way of travelling too (Credit: Getty Images)

During the two-week course of the Uber Boat’s pilot, travellers only had to book ahead to reserve a seat using an app. The boat accommodated at least 35 people per ride from weekdays to the weekend. They were conveyed to their destinations on designated routes – a maximum of four trips in a day. At the moment, Uber Boat is still evaluating whether the boat could become a long-term solution for Lagosian commuters.

Transport by water might be one answer to Lagos’ epic traffic jams, but is taking a boat or ferry more sustainable than travelling by road?

Little data exists comparing the options in Lagos. But according to estimates by the UK’s Department for Business, Energy and Industrial Strategy, a foot-passenger ferry has lower carbon emissions per passenger than a bus, coach or taxi.

Although jetties are springing up all over the city, water transport has yet to make a dent into the huge numbers relying on the roads. In particular, numbers on ferries have been low during the pandemic. When a service is available, social distancing protocols mean the number of travellers per trip is halved.

But Lagosians like Oyelese are eager for the change and integration of the existing ferry services with the rest of the city’s transport network. “You need something like a ferry boat that could even take vehicles, goods as well as passengers,” she says. “And that’s one thing I feel is missing.”

One prominent defence against rising waters is the “Great Wall of Lagos”, a barrier made of 100,000 concrete blocks weighing five tonnes each. The 18m-high (60 ft) sea defence protects a stretch of shoreline by Lagos’ Eko Atlantic, a development being built on reclaimed land, and will be 8.4km long when completed.

The wall is intended to protect the new development from the unforgiving long swell waves that originate in storms in the southern Atlantic Ocean, though critics have raised concerns that while protecting the shore in some regions, it is accelerating erosion in others. 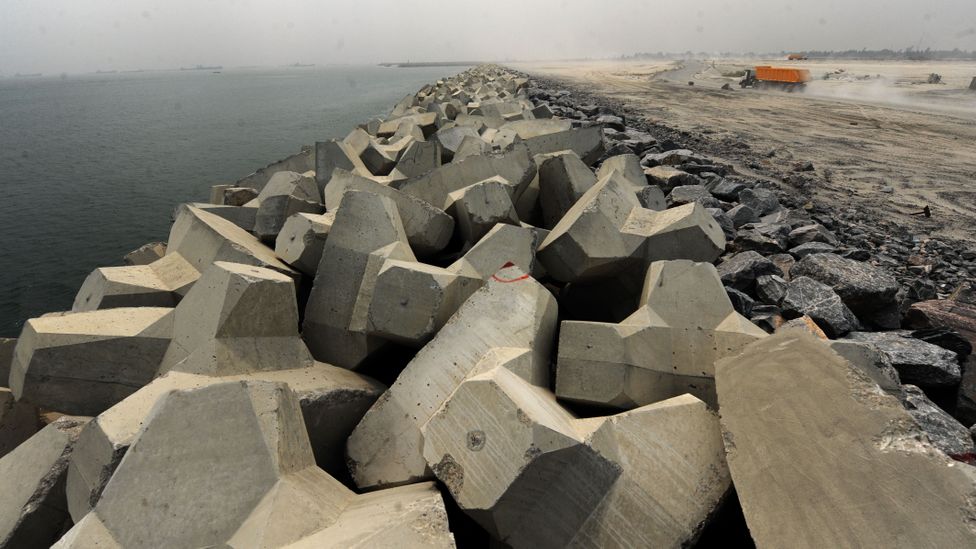 The “Great Wall of Lagos” is intended to reinforce the coast and protect it from erosion (Credit: Getty Images)

Other structures to protect the sea include constructing 18 groynes on the shores of the Eko Atlantic. A groyne is a structure built to trap sand and prevent it from washing into the ocean. Those installed at Eko Atlantic are each spaced 400m (1,300ft) apart and span a distance of 7.2km (4.5 miles). Further groynes have been proposed to cover up to 60km (37.3 miles) of the state’s coastline, with officials estimating this would cost $1bn (£800m), the News Agency of Nigeria reported.

While structural coastal defences might be some of the most visible interventions to counter flooding, one of the least visible could be at least as important for the city’s resilience.

The app covers a much broader region than an earlier service, WetIn App, which was designed by Nigeria’s agriculture ministry. The WetIn App only targets farmers in three flood-prone states of the federation, giving warnings four days before an expected disaster. Prior to this, the authorities had to rely on media such as magazines, radio and television to get the word out about an imminent flood.

NIHSA is confident that the new Flood Mobile App will help people monitor daily flooding risks anywhere in Nigeria. Already, some early signals urging people to be on alert have started playing out, as torrential rains flood the roads in business and residential districts. Though smart device penetration remains relatively low among all but the younger population in cities, leaving out prospective users in the rural areas and those without mobile phones.

Without changes like these and many others, sea level rise this century would displace millions in Lagos, with low-lying districts like Makoko among the most vulnerable. But by learning to live on the sea and its waterways, defending the city’s coast and knowing when inundation is most likely, Africa’s largest city is leveraging its ingenuity to stay afloat.

What are ‘vaccine passports’ and should we have them?

REDMI K40 PRO+ FAQ – GET ANSWERS TO ALL YOUR QUESTIONS